We Review: The Hunger Games: Mockingjay – Part II “Nothing less than awesome.” – MR

The Hunger Games: Mockingjay – Part 2 is a 2015 American epicscience fictionwar film directed by Francis Lawrence with a screenplay by Peter Craig and Danny Strong. It is the second of two cinematic parts based on the novel Mockingjay, the final book in the Hunger Games trilogy, written by Suzanne Collins, and the fourth and final installment in The Hunger Games film series, produced by Nina Jacobson and Jon Kilik and distributed by Lionsgate. The film stars Jennifer Lawrence, Josh Hutcherson, Liam Hemsworth, Woody Harrelson, Elizabeth Banks, Julianne Moore, Sam Claflin, Jena Malone, Philip Seymour Hoffman (in his final film role), and Donald Sutherland. It is the sequel to the first part of the Mockingjay adaptation, The Hunger Games: Mockingjay – Part 1, which was released on November 21, 2014.

The plot concludes the story of Katniss Everdeen; realizing the stakes are no longer just for survival, Katniss teams up with her closest friends, including Peeta, Gale, and Finnick for the ultimate mission. Together, they leave District 13 to liberate the citizens of war-torn Panem and assassinate President Snow, who’s obsessed with destroying Katniss. Principal photography on both parts of the film began on September 23, 2013, inAtlanta, before moving to Paris for two weeks of filming and officially concluding on June 20, 2014, in Berlin, Germany.[6]

Part 2 is scheduled to be released on November 20, 2015, in the United States in 2D and IMAX, internationally in 2D, 3D, RealD Cinema and IMAX 3D in select territories, and will be the only film in the film series widely released in 3D.

With the nation of Panem in a full-scale revolutionary war, Katniss (Jennifer Lawrence) confronts President Snow (Donald Sutherland) in the final showdown. Teamed with a group of her closest friends – including Gale (Liam Hemsworth), Finnick (Sam Claflin), Cressida (Natalie Dormer) and Peeta (Josh Hutcherson) – Katniss goes off on a mission with the District 13 unit as they risk their lives to liberate the citizens of Panem, and stage an assassination attempt on President Snow who has become increasingly obsessed with destroying her. Although rebels – including fellow victors, Johanna (Jena Malone), Haymitch (Woody Harrelson), and Beetee (Jeffrey Wright) – now control most of Panem, the Girl on Fire must still overcome one last challenge to win President Snow’s “game” – to conquer the Capitol at the risk of losing her friends and loved ones. The mortal traps, enemies, and moral choices that await Katniss will challenge her more than any arena she faced in the Hunger Games as she realizes the stakes are no longer just for survival – they are for the future of Panem.[7]

The Hunger Games movies ended as they started, only the world was a better place, and a girl with a willful heart, had finally made the man-decision a whole generation of non-readers have been waiting for her to make. The losses are heartfelt, and some of them are as surprising as they are infuriating. That little bit of satisfaction I waited 4 movies for, and intentionally stopped reading the last book of the series to wait and see, was not there. A conclusion that satisfies everyone is hard to find. In the end, though, this whole series is nothing less than awesome. Highly Recommended in IMAX – MR

I write fantasy books under the pen name M. R. Mathias, and I just wanted everyone to know that my entire collection of kindle novels, I’m talking the 7 and 800 pagers, and all, are just .99 each until the end of November.

Just start here at the M. R. Mathias Amazon Author Page and stock up. On Dec. 1st everything thing goes back to its proper price, but right now you can get all three of the HUGE, The Wardstone Trilogy novels, the entire collection of Award Winning Dragoneer Saga books, and The Legend of Vanx Malic books all for just .99 cents each.

Why would I do such a thing? Well to say thanks to those who have read and reviewed my books over the last five years, and because the world could sometimes use a cheap distraction from itself.

Lastly, we have Thursday evening, Nov 19th premier IMAX seats for The Hunger Games – Mocking Jay II. Our review will be posted by midnight Thursday, 11/19/15. Look for it here or at @WizardWyrm, @DahgMahn, or @MrStubbsSays

We Review: The Martian “A good sci-fi film. Recommended.” MR

The Martian is a 2015 American science fiction film directed by Ridley Scott and starring Matt Damon. The film is based on Andy Weir‘s 2011 novelThe Martian, which was adapted into a screenplay by Drew Goddard. Damon stars as an astronaut who is mistakenly presumed dead and left behind on Mars, and who then fights to survive. The film also features Jessica Chastain, Kristen Wiig, Jeff Daniels, Michael Peña, Kate Mara, Sean Bean, Sebastian Stan, Aksel Hennie, Donald Glover, Mackenzie Davis and Chiwetel Ejiofor in supporting roles.

Producer Simon Kinberg began developing the film after 20th Century Foxoptioned the novel in March 2013. Drew Goddard adapted the novel into a screenplay and was initially attached to direct, but the film did not move forward. Scott replaced Goddard, and with Damon in place as the main character, production was green-lit. Filming began in November 2014 and lasted approximately 70 days. Around 20 sets were built on a sound stage in Budapest, Hungary, one of the largest in the world. Wadi Rum in Jordan was also used as a practical backdrop for filming.

The film premiered at the 2015 Toronto International Film Festival on September 11, 2015. 20th Century Fox released the film in theaters in the United Kingdom on September 30, 2015, and in the United States on October 2, 2015. The film was released in 2D, 3D, IMAX 3D and 4DX.[5] The film has grossed over $478 million worldwide, becoming Scott’s highest-grossing film to date, and has received highly positive reviews.

In the year 2035,[6]the crew of Ares III, a manned mission to Mars, has established a temporary artificial habitat, called the Hab, on Mars, where they are staying for 31 Martian days, or sols, and depart back to Earth in their orbital probe. Eighteen sols into the Mars mission, however, the crew is forced to abandon the planet to escape a massive Martian storm. While evacuating, astronaut Mark Watney is lost and presumed dead as his biomonitor is damaged. With the lives of her crew at stake, mission commander Melissa Lewis is forced to leave the planet rather than risk the launch vehicle collapsing, leaving Watney behind. 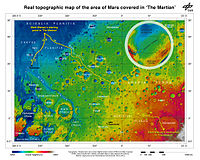 Watney is unable to contact NASA, and presumed dead by the crew and mission control. However, Watney awakes to the sound of a low oxygen warning and makes his way back to the Hab, though injured. After performing self-surgery to remove a piece of antenna wire impaled in his stomach, Watney speculates the broken wire is what damaged his biomonitor and is the cause of the communication failure, while the coagulation of blood and the wire itself kept the suit sealed and pressurized. After calculating that he has 300 sols of food, he uses his knowledge as a botanist to make a makeshift organic potato farm using the central room of the Hab, anticipating that he will need to survive for at least three years and journey to the landing site of Ares IV (around 1480 sols), which already has some of its infrastructure on Mars. He keeps a series of video logs to maintain morale and begins to modify the habitat’s rover to make it capable of long journeys.

While reviewing satellite photos of Mars, Mars mission director Vincent Kapoor and satellite planner Mindy Park realize that Watney has survived, and immediately start planning to establish contact. Mitch Henderson, the Hermes flight director, immediately assumes the Ares III crew, who are currently traveling back to Earth aboard the spacecraft Hermes, will be informed of the survival of their crewmate. However, NASA director Teddy Sanders believes the crew must instead focus on their own mission, especially since NASA has no viable rescue plan in place at the time. Watney locates the Pathfinder probe, defunct since 1997, and uses it to regain contact with Earth. Watney and the JPL team use the Pathfinder’s camera and signs showing the hexadecimal alphabet using the ASCII code to improve efficiency of communications. Later on, using instructions from NASA, Watney modifies his rover to be able to send and receive text messages to and from NASA.

As Watney continues to grow his crop, Henderson and JPL director Bruce Ng formulate a plan to send a space probe to Mars and resupply Watney with enough food to allow him to survive until Ares IV can reach him. As the launch date approaches, an increasingly optimistic Sanders authorizes them to tell the crew, and they are informed in a video message from Henderson. After being told the launch window will run out before inspections can be completed, Sanders makes the decision to skip inspections to save time and hope for the best. This decision backfires when the probe explodes shortly after liftoff. Watney suffers his own disaster when the airlock on the habitat explosively decompresses, killing his potatoes and reducing his projected supply of food.

The China National Space Administration (CNSA) offers NASA a lifeline: a classified booster that can carry a payload to Mars. Rich Purnell, a JPL astrodynamicist, discovers a method of rescuing Watney using the booster and the Hermes, postponing their return to Earth. They can send the rocket to Mars, arriving barely in time to resupply Watney, or instead use the rocket to resupply the Hermes so that the Ares III crew can return to Mars and recover Watney. Sanders insists on sending the probe to resupply Watney. Someone (presumably Henderson or Purnell) sends the Hermes crew the necessary calculations to put them on the gravitational slingshot back to Mars. Lewis and her crew vote unanimously to rescue Watney themselves. NASA successfully resupplies the Hermesand Lewis’s crew begins the return journey.

A really entertaining sci-fi flick. I think we all wish there was a significant space program. Ideas like these are key. Life imitates art, or so they say. This one held my attention raptly, even though the science was stretched beyond reality. This was a very good sci-fi film. Recommended. 4 stars, and highly recommended. MR

Find The Martian and see the new trailer here.